Eurogroup for Animals podcast episode: Launch of the World Federation for Animals 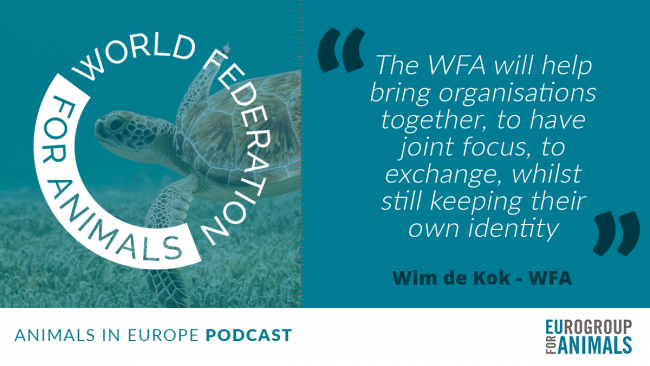 The World Federation for Animals was launched on 8 February 2021 and, to celebrate, this week the Eurogroup for Animals will discuss the exciting new initiative on our Animals in Europe podcast.

Host and CEO Reineke Hameleers will share how and why the World Federation for Animals was formed. She will discuss the founding with two fellow board members, Britta Riis and Wim de Kok.

We are also given insight into the goals and ambitions of the federation, and what the World Federation for Animals hopes to achieve for animals by representing and advocating for the animal protection movement on the international stage and at the United Nations.

Given the scope of this coalition, this episode may prove interesting to other organisations representing animals, on land or in the ocean, as the guests discuss the benefits of membership and the current group of founding organisations.

Listen to the episode below:

EP#7: Launch of the World Federation for Animals

The World Federation for Animals intends to elevate the awareness around animal welfare and animal advocacy on the global stage and at the UN.

Our mission is to improve the well-being of all animals and end exploitation and suffering. We envision a world in which animal sentience is respected; and all animals live a good life, with their well-being protected.

Link to more membership information
We use cookies on our website to give you the best experience by remembering your preferences. By clicking Accept, you consent to the use of all the cookies.
Do not sell my personal information.
Cookie settingsAccept
Manage consent