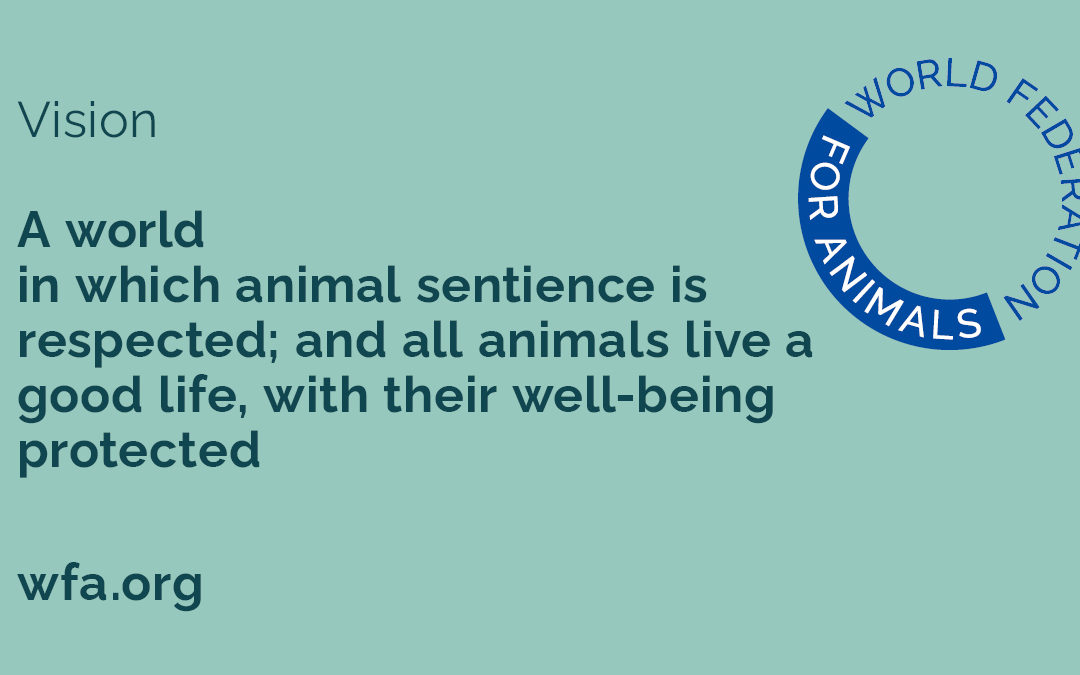 This previous blog explained the work of the World Federation for Animals (WFA) and our members in the run-up to UNEA 5.1.

When UNEA 5.1. finally arrived, it was rather an anti-climax for WFA, and for civil society more generally. This first virtual UNEA consisted of a brief two-day procedural meeting, with two short Plenary sessions and two half-day “Leadership Dialogues”. Due to the “technical limitations” of the platform used for UNEA 5.1, there were only a limited number of “active” seats for Major Groups (with speaking rights). WFA was included for the first Plenary session, as one of a few organisations that had been “actively engaged with UNEP in the past”, but not for the final high-level Plenary. Listen-only links were available for the two “Dialogues”, which were actually a stream of set piece statements, rather than an interactive discussion.

However, the UNEA President, Mr. Sveinung Rotevatn (Minister of Environment and Climate of Norway) did specifically mention the need for participation, so there is hope for more meaningful engagement in the resumed physical session at UNEA 5.2.

Whilst the Plenary sessions were more procedural, the Leadership Dialogues had the potential to be more inspirational. However, seasoned advocates were disappointed when there was more reiteration of past messages than new actions to turn the tide of the triple crises of climate change, biodiversity loss and pollution, or the need to prevent future pandemics. Most of the talks were about how well the countries were doing, so a cheap kind of PR, without really going into a discussion on how to improve policies and actions.

Opening the Dialogues, the Deputy Executive Director of the United Nations Environment Programme (UNEP), Joyce Msuya, spoke about the inextricable linkages between the health of people and nature, stating that we must “make peace with nature” – otherwise we will increase the risk of future pandemics through zoonoses. We must address the three crises of climate change, biodiversity loss and pollution together in a coordinated and integrated way. And use the pandemic as an “opportunity” to put in place green recovery. We have to invest in the circular economy, and address sustainable consumption and production. For WFA, the path lies wide open to integrate animal issues into this debate as it is now too implicit. Animals are indeed part of “nature” but need an explicit mention as being sentient beings and demanding special treatment and policies.

Just before UNEA 5.1. UNEP released its first Synthesis Report “Making Peace with Nature”: A scientific blueprint to tackle the climate, biodiversity and pollution emergencies which was based on evidence from global environmental assessments. This report examines how climate change, biodiversity loss and pollution can be tackled jointly within the framework of the Sustainable Development Goals. This report includes 66 references to animals: Most of these refer to aspects such as animal diseases, animal species, animal extinctions and pollinators. However, the report does also refer to the need for practices to improve animal welfare.

The main outcomes of UNEA 5.1. can be found here. These are:

WFA played an active role in the Global Major Groups and Stakeholders Forum (GMGSF), which prepared civil society’s input to UNEA 5.1. This is explained in more detail in this earlier blog.

Here is the Summary Report of the Global Major Groups and Stakeholders Forum.

The final outcome document for this, which will be included in the UNEA proceedings, is here.

As can be seen, the GMGSF includes multiple mentions of animal welfare and animal issues, including the need to incorporate animal health and welfare in UNEP policymaking and programmes, including the One Health-One Welfare approach; and the need to transform food systems. This is a combined civil society position which we can build on in the run up to UNEA 5.2.

The theme and pillars of UNEA 5.2. are very relevant to the work of WFA. These are:

In preparation for this work, the Major Groups Facilitating Committee has established six thematic working groups to facilitate Major Groups’ input into UNEA 5.2. Of these, WFA and its Founding Member Compassion in World Farming (CIWF) have been appointed as facilitators, as follows:

WFA will also take part in the work of other clusters.

WFA is also discussing with Major Groups the need for follow-up to ensure full and meaningful stakeholder engagement in UNEA 5.2. and beyond.

There is coverage of UNEA 5 in a number of places. For example:

All pre-session and post-session resources including documentation and meeting recordings are available on the UNEA-5 website.

All statements and video recordings are available here.

The Video recordings can also be accessed through UNEP’s YouTube channel.

Highlights and images of main proceedings for 22 February 2021

Highlights and images of main proceedings for 23 February 2021

The “contribution of the environmental dimension of sustainable development to building a resilient and inclusive post-pandemic world” was discussed by delegates taking part in two “leadership dialogue” sessions. The video showed at the opening of these sessions can be seen here.

The final outcome document is here.

The GMGSF includes multiple mentions of animal welfare and animal issues, including the need to incorporate animal health and welfare in UNEP policymaking and programmes, including the One Health-One Welfare approach; and the need to transform food systems. There is more on this in this earlier blog.

The World Federation for Animals intends to elevate the awareness around animal welfare and animal advocacy on the global stage and at the UN.

Our mission is to improve the well-being of all animals and end exploitation and suffering. We envision a world in which animal sentience is respected; and all animals live a good life, with their well-being protected.

Link to more membership information
We use cookies on our website to give you the best experience by remembering your preferences. By clicking Accept, you consent to the use of all the cookies.
Do not sell my personal information.
Cookie settingsAccept
Manage consent